Living a life of “Plentitude”. 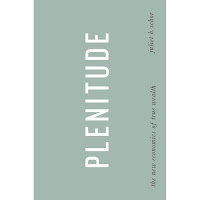 “Plentitude” by Juliet B. Schor is a book that discusses the new economics of true wealth. She challenges the once common practice of economic growth by way of borrowing and overleveraging, which eventually lead to the near meltdown of the global market place and the collapse of several financial institutions that have been around for over a hundred years.

Juliet Schor and her book first appeared on my radar when she did an interview on National Public Radio’s daily afternoon show “Marketplace” in early April of this year. Schor’s book at first reads like a textbook, with a very philosophical and scholarly tone (not surprising considering she is currently a professor of sociology at Boston College), but eventually makes way to more fluid reading with theories and anecdotes that are both eye opening and refreshing. The basic fundamentals of Plentitude are to veer away from the business as usual or “BAU” approach and adhere to a less is more mentality. To lower one’s impact on day-to-day life by means of self-sustainability, support of local markets and community and the reassessment of our values and priorities. And in doing so, one does not have to put on a brown robe and clogs and live a life of depravity. In fact, Schor states that Plentitude does not make consumption less important nor should we even be consuming less.

Plentitude does not put the emphasis on how much or what we consume but rather how we consume it and what cost. Schor not only addresses the material side of consumption, she addresses the consumption of our time as well. A typical employee in the United States works an average of 2080 hours per year, which is the most out of any country in the world. Other countries in Europe work anywhere from 5-8 hours per week less than we do in the U.S. Basically the individual principles of Plentitude are: “spend less and work less, create and connect more.”

Over the past 50 years or so, we have become increasingly dependent on Wall Street and the financial markets as a means of growing and acquiring wealth. This has been driven by consumer debt and consumerism, practices that are proving to be unsustainable and not just ecologically harmful but, at times has proven to be unfulfilling as well.

Plentitude suggest; working less in a declining market, but to use the freed up time productively, to invest in new skills and activities. Some of the time should be deployed to replace higher priced food, energy, and consumer goods with homemade or community-produced alternatives. Schor states that freed up time should also be used to invest in social relationships, which is another form of wealth that we tend to overlook. And some hours will be spent in High-return leisure activities that require little or no monitory outlay; these are used as a substitute for the expensive commodities of the faster paced, higher –income lifestyle.

Schor’s Plentitude is a very intriguing and thought provoking book. I have never considered myself to be overly concerned with my own carbon footprint and use to scoff at the whole “green” movement as a trend manufactured by Prius driving celebrities who preach about lowering emissions and solar power while they travel from premier to premier in private jets. Plentitude goes beyond posturing, it raises awareness on how damaged the foundation of our current socio-economic system truly is, which was made abundantly clear in the stock market crash of 2008. Business as usual simply cannot continue; the days of stealing from Peter to pay Paul have finally caught up to us. The bottom line is that we need to interlace our dreams from the past with the courage to create a new future that focuses on achieving balance: “It’s how efficiently we produce, not how much we produce, that determines how well off we are.”
Posted by vicleyson@gmail.com at 10:54 AM