Getting out of Dodge. 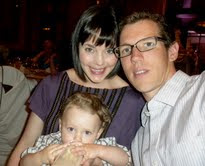 With California being the epicenter of the housing meltdown along with a budget crisis so severe not even the Governator can save it, more and more people are getting out of Dodge and seeking refuge in places that were once considered simply “fly-over” states.

During the last fiscal year, 135,173 more people moved out of California than moved in from other states. Though just a drop in the bucket for a state of 38 million people, the trend remains significant because such declines usually occur when working Californians decide better opportunities lie elsewhere.

This was the topic of conversation when I met with my good friend Sara(Sara, Nate and Charlie shown above) for lunch at a local coffee shop in her neighborhood of Pasadena. The genesis of the subject matter, however took place years ago, well before the economic meltdown of 2008. Sara reminded me that we first discussed the idea of her and then boyfriend Nathan aka “Nate” moving out of L.A. around 2006 when everything was on the up and up and opportunities were a plenty. She also reminded me what my initial reaction was, when she brought up the topic. “Leave L.A.? No way kiddo, you guys are underestimating your ability to succeed here, you just have to be more ambitious, if you can make it in L.A. you can make it anywhere.” What a difference a couple of years and a stock market crash makes. The person who made that comment while sitting on his fuel injected high horse, has since been served a healthy slice of humble pie with a side of perspective. I decided to make our lunch into a lunch / interview with Sara’s permission of course.

I asked Sara to give a general bio of her and Nathan, how they met, how long they lived in L.A., etc. for the purpose of this post.

I'm 29 and Nate is 30. I've lived in L.A. my entire life and Nate moved here from Wisconsin when he was 5. We both grew up in La Crescenta and went to Monte Vista Elementary where we met in the third grade then we both went to Crescenta Valley H.S. and I went on to CSUN and he went to Sacramento State and then transferred to Utah State. We've been married for three years this Wednesday (7/28). I am an only child but my Dad is one of 7 kids so I have a fairly large extended family spread out around the country. Nate is the youngest and has two older sisters, one of whom lives in Colorado Springs. I am a stay at home mom and a Graphic Designer and Nate is a High School Science Teacher and varsity football coach. We've lived in Pasadena for nearly 6 years.

1. What are some of the things you guys love most about living in L.A.?
There is a never-ending availability of things to do. The good live music, amazing food, museums, parks, beaches, and cultural diversity can't be beat.
Also, we have a great network of friends here.

2. How has your attitude changed about L.A. in the last couple of years? And what are the reasons behind those changes?
When I was younger and in college L.A. seemed like the place to be. There was always a show to go to, a bar to hang out at or a diner open until 3am. It wasn't until we got married and not long after, became pregnant with Charlie that we realized what a difficult place L.A. is to achieve the goals we had set for ourselves. We want to raise healthy children, own a home and make a good living without having to work ourselves to the bone and sacrifice time with our family and it is near impossible to do that in L.A. now.

3. When we last spoke you talked about Nate signing a 1 year contract at the school he is currently teaching at…you said that the 2 of you have been thinking about leaving L.A. for sometime and that day may come at the end of his contract next year, where are you guys thinking of moving to?
Denver, Colorado is a definite possibility but we plan on taking the next year to really look into different cities around the country to find a good balance of low cost of living, a strong housing/job market, good schools, four seasons (Nate wants snow!) and at the top of our list is a place with clean air. Places like Portland (OR), Nashville, Madison (WI) and Seattle or all possibilities as well.

4. You guys are a very young hip couple that seem perfect for the L.A. scene and all it has to offer, what made you think about moving to a place like Colorado?
We think of ourselves more of the young boring types, but thank you. Living in Colorado near Denver would allow us access to things that only a big city can offer like good food, music, sporting events and museums without the insane cost of living that there is here in L.A. The air is clean, there isn't a shortage of good schools, and the winter brings snow one day and sunshine the next.

5. How much do you know about Colorado?
We both have family with young children in Colorado and they can't say enough about what a great place it is to raise kids. We've visited a number of times and have both really loved what we saw. We also frequently look at real estate in the suburbs between Boulder (which tends to be on the pricey side) and Denver and it's very affordable and Nathan has found that their educational system is fairly strong especially in comparison to California's. Colorado has been at the top of our list for a long time so we've looked into everything from job availability to air quality.

6. What are you guys looking forward to most about moving and how do you envision a life out of L.A. ?
Buying a house and not dreading every breath we take are probably at the top of our list. We hope that we can own a home and live comfortably off of one salary until Charlie and our future children start school.

7. What do you think you would miss most about L.A.?
More than anything it would be the people. Our friends and family here are irreplaceable but almost everyone we know is thinking along the lines that we are so being separated from everyone seems inevitable. Also, I would miss La Cabanita, there's no better Mexican food anywhere.

For the last 29 years I have been proud to call Los Angeles home. I love the weather, the diversity and the culture. But as I get older and my idea of “fun” shifts from the Vegas Strip to the Eastern Sierra Mountains I slowly realize the appeal of settling down elsewhere. A place where “Ed Hardey” and “Juicy Couture” are replaced with a pair of jeans and a t-shirt, and wearing sunglasses indoors is substituted with an offer of sweet tea with a southern drawl.
Posted by vicleyson@gmail.com at 10:17 PM