The true cost of eating cheap. 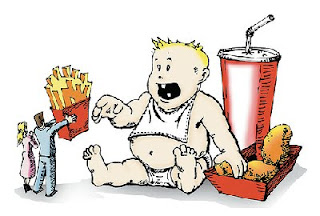 With the beehive of activity that represents most of our daily lives, juggling family, friends and careers, all these things along with the constant urge to multitask…the most common phrase you tend to hear these days is “Who has the time to do that?” Which is usually in response to the question of “How often do you prepare a home cooked meal?”

Sure, eating out at fast food restaurants is, well… fast, cheap and convenient but at what cost? Almost 30% of the U.S. population is considered obese and more than 20% of all Americans eat fast food at least twice a week. Fast food chains whose popular combo meals contain more calories than what the average person should consume in an entire day (2000 calories), let alone just for one meal, which begs the question …Just how much cheaper is it to eat out than it is to prepare a healthy meal at home?

The catalyst for such a question came after having my dear friend Melissa and her 2 kids over for dinner not too long ago. I agreed to cook the main course, along with a couple of sides and a dessert while she brought over a salad that she prepared herself. I cooked a grainy mustard baked chicken dish with asparagus and roasted potatoes. All 4 of us enjoyed our dinner and ate heartily. And since I was the host, I was lucky enough to keep all the leftovers, which fed me for several days after. It wasn’t until I was cleaning up and loading the dishwasher that I came across the Trader Joes receipt and realized that I just fed 4 adults, with plenty of leftovers for under 30 bucks. In all likelihood we probably would've spent the same amount of money had the 4 of us decided to go to a McDonald's Drive Thru for dinner. All it took was an hour of prep, a little creativity, some good friends and good conversation to transform a bag of groceries into a healthy, delicious dinner and a good time had by all.

I know that meals like this cannot be prepared day in and day out and the idea of eating “from a drive thru” rather than “from scratch” is something that we all have to do from time to time, but thinking ahead along with a little preparation can be the difference between regularly eating at home and occasionally eating fast food vs. doing just the opposite. When it comes to food, not even the most “hoity toity” of restaurants can compete with knowing where your food came from and just as important, who prepared it.

***Below is a meatloaf recipe, that I am sure some of my loyal readers have tried and liked …I hope. Even though I have come a long way since my days of making an absolute disaster out of trying to heat up a frozen lasagna in the oven, I now consider myself to be a decent cook at best and even I was able to make this simple recipe work on my first try. It’s easy, healthy, very tasty and will keep meatloaf sammies coming for days!***

Directions
Preheat the oven to 350°. Line Pyrex dish with foil and spray lightly with oil.

In a large bowl, combine the ground turkey, eggs, bread crumbs, 1/2 cup of ketchup, the Worcestershire sauce, salt, pepper and the cooled vegetables. Use your hands to mix everything together.

Transfer the mixture to the center of the baking sheet and form into a loaf. Coat the meat loaf with the remaining 1/2 cup ketchup.

Bake for 1 to 1 1/2 hours (depending on the shape of your loaf), until the meat loaf is firm. Let set for about 5 minutes before slicing.
Posted by vicleyson@gmail.com at 10:32 PM 4 comments:

Having had a week filled more with reading rather than writing, I've decided to share to the loyal few readers out there a wonderful article written in the Sunday LA Times OP-ED section.

"She's just a cabdriver's daughter" is a beautifully written article about acknowledging where we came from rather than ignoring it. It's about being proud of a modest upbringing rather than embarrassed by it. It is a story that I and so many other people I know can relate to and be inspired by. Enjoy!

In the morning, before my father and I go our separate ways to work, we chat amiably. "Good luck on your day." "Hope business is good." And our one response to everything: "Inshallah." God willing.

I get into my mini-SUV and head off to the hospital, groaning about the lack of sleep, the lack of time, but also knowing that I am driving off to what has always been my dream.

My father gets into his blue taxi, picks up his radio and tells the dispatcher he's ready. Then he waits. He waits for someone wanting to go somewhere. He waits to go home to my mother, the woman he calls "the boss." Maybe today will be a good day. He will call her up and tell her he is taking her out tonight. He can do that now that we're all grown up; now that he doesn't have to save every dime for the "what-ifs" and the "just-in-cases."

There is very little complaining in his car. His day starts off with a silent prayer, then a pledge: Hudaya ba omaide hudit. God, as you wish. Then he hums or sings. Some songs are about love and some about loss. They are all about life. He sings. He smiles the whole time.
Get the best in Southern California opinion journalism delivered to your inbox with our Opinion L.A. newsletter. Sign up »

My father is the type of person who is content to listen, but I love it when he speaks. There is wisdom there, although he does not intend there to be.

"Not much," I reply. "My life revolves around these books, Dad; there is little to say unless you want to hear about the urinary tract."

"You know when Gandhi's minister of foreign affairs died, his only true possessions were books. It is the sign of a life worth living," he replies and begins to butter his toast.

Sometimes, the years of education and learning shine through the injuries and lost dreams. I get a glimpse of the man who once existed, and the one who never will. Who would he have been, I wonder, if the bombs hadn't come down in 1978? What if I could take away the time he spent in a coma, the years of treatment and surgery, the broken bones and disabilities. What if there were no refugee ghettos, no poverty, no fear, no depression written in his life history. Who could he have been? The thought saddens me, but intrigues me as well. Is it possible that he is who he is because the life he has lived has been filled with such tragedy? Perhaps these stories were the making of my hero.

Sometimes he'll tell me about his college days, about an Afghanistan I have never known and very few people would believe ever existed.

"In the College of Engineering, there was this lecture hall, with seats for 1,000 students," his says as eyes begin to get bigger. "At the end of the lecture, the seats would move. The whole auditorium would shift as you spun along the diameter. The engineering of the building itself was very interesting." He continues to describe the construction details, then sighs. "I wonder if it's still around?"

There is a pause. For 25 years I have tried to fill that silence, but I have never quite figured out what to say. I guess silence goes best there. He is the next one to speak. "You see, even your old-aged father was once part of something important."

When he says things like that I want to scream. I don't want to believe that the years can beat away at you like that. I don't want to know that if enough time passes, you begin to question what was real or who you are. I am unconcerned with what the world thinks of him, but it is devastating to know that he at times thinks less of himself.

We are the same, but we are separated. People don't see him in me. I wish they would. I walk in with a doctor's white coat or a suit or my Berkeley sweatshirt and jeans. High heels or sneakers, it doesn't matter, people always seem impressed with me. "Pediatrician, eh?" they say. "Well, good for you."

I wonder what people see when they look at him. They don't see what I see in his smile. Perhaps they see a brown man with a thick accent; perhaps they think, another immigrant cabdriver. Or perhaps it is much worse: Maybe he is a profile-matched terrorist, aligned with some axis of evil. "Another Abd-ool f-----g foreigner," I once heard someone say.

Sometimes the worst things are not what people say to your face or what they say at all, it is the things that are assumed. I am in line at the grocery store, studying at a cafe, on a plane flying somewhere.

"Her English is excellent; she must have grown up here," I hear a lady whisper. "But why on earth does she wear that thing on her head?"

"Oh, that's not her fault," someone replies. "Her father probably forces her to wear that."

I am still searching for a quick, biting response to comments like that. The trouble is that things I'd like to say aren't quick. So I say nothing. I want to take their hands and pull them home with me. Come, meet my father. Don't look at the wrinkles; don't look at the scars; don't mind the hearing aid, or the thick accent. Don't look at the world's effect on him; look at his effect on the world. Come into my childhood and hear the lullabies, the warm hand on your shoulder on the worst of days, the silly jokes on mundane afternoons. Come meet the woman he has loved and respected his whole life; witness the confidence he has nurtured in his three daughters. Stay the night; hear his footsteps come in at midnight after a long day's work. That sound in the middle of the night is his head bowing in prayer although he is exhausted. Granted, the wealth is gone and the legacy unknown, but look at what the bombs did not destroy. Now tell me, am I really oppressed? The question makes me want to laugh. Now tell me, is he really the oppressor? The question makes me want to cry.

At times, I want to throw it all away: the education, the opportunities, the potential. I want to slip into the passenger seat of his cab and say: This is who I am. If he is going to be labeled, then give me those labels too. If you are going to look down on him, than you might as well peer down on me as well. Close this gap. Erase this line. There is no differentiation here. Of all the things I am, of all the things I could ever be, I will never be prouder than to say that I am of him.

I am this cabdriver's daughter.

Waheeda Samady is the pediatric chief resident at UC San Diego's Rady Children's Hospital and a committee member of CAIR San Diego. A version of this article appeared in the anthology "Snapshots: This Afghan American Life."
Posted by vicleyson@gmail.com at 9:40 AM No comments: