Optimism in the face of rejection 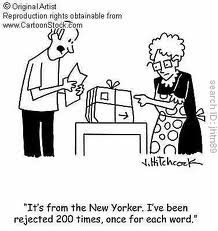 With all the doom and gloom in the news about the weak economy, high unemployment rate and entire states contemplating bankruptcy it’s no shock to anyone that now, is probably the most inopportune time to be looking for a job. In fact, nowadays getting one interview after sending out hundreds of resumes warrants treating yourself to a nice drink during happy hour. For the last few months I have been slowly trying to transition over from the world of number crunching to something more creative. Starting this blog last May was the first step and taking on copy writing gigs here and there, writing the occasional bio for a friend of a friend’s website was another. Having majored in English Literature for a little over a year back in college has left me forever fond of the written word. There are few talents I admire more than the ability to hold someone captive with just the words they put to paper.

One day, while looking through Craigslist for any job openings that had something to do with writing, I came across an ad that seemed like it was describing my dream job. It was for a Senior Copywriter and Editor position at a Business Public Relations Agency in Los Angeles. Part of the ad read like the following; “Looking for smart, creative news junkies who love to write and pitch stories.” I couldn’t believe what I was reading; I was smart…I thought to myself and a news junky? I’ve actually had friends call me that very same thing. I couldn’t send them my resume fast enough, there was a part of me that wanted to both email and fax my resume, but decided against it. I had to literally disguise my excitement in the cover letter I had included in the email as to not come off as too anxious or desperate. Then much to my surprise, I received a call the very next day from what sounded like a receptionist wanting to schedule an interview with me. “Be prepared to spend at least an hour with us, bring some writing samples and... there will be a writing test.” I spent the week leading up to the interview getting advice from close friends that I considered to be good writers or wrote for a living. I took a poll as to which one of my blog posts I should present as writing samples and even did a little practice Q&A with them to better prepare for an interview that I was already becoming very nervous about. The day of the interview I woke up earlier than usual to give myself plenty of time to calm my nerves and even listened to a saved voicemail from a close writer friend of mine for motivation. He was one of the first people that read my inaugural blog post and was very complimentary and encouraging. This guy was an author and an editor of a magazine at one point, if he liked my writing, then I must be doing something right.

By the time I finally arrived to the interview I felt like I had walked into a house that had been staged specifically to my own personal taste. There were plasma screen TV’s everywhere with news on every single one of them. Not only did I know what stations were on but I could identify most of the anchors by name as well. I had got there at 1:40 pm and my interview wasn’t until 2, but they met with me right away. First up was the Vice President of the company, who seemed to be the first line of defense. He asked me both typical and not so typical interview questions like “How do you think you would handle working on a story that wasn’t very interesting to you?” after about 45 minutes he led me to the President and founder’s office. I sat down and admired the view of Wilshire Blvd., eagerly waiting for her to finish a phone call she was on. So far so good I thought, he wouldn’t have had me meet with this woman had he not liked my answers. Once she got off the phone she too, looked over my resume briefly and commented on my experience and pulled up my blog’s URL on her laptop while she was still standing. She read a couple of passages out loud and even asked me about a picture of my dog that I had on one of my posts. She had nothing but good things to say and had to take another call, she politely told me to head back to the conference room where the remainder of the interview would take place. I then met with two junior associates of the agency, which was far more informal and casual than the previous meetings. In fact, the last two people I interviewed with were more conversational than they were anything else; one of the main topics at hand during my last meeting was the upcoming boxing fight between Manny Pacqaui and Antonio Margarito, things could not have gone better. The finale was the writing test I was dreading. The first person I met with came back into the room with a laptop and asked me to write a press release for the agency. The topic was, me being hired as their new Senior Copywriter. What a great topic, I said to myself; it was easier than I thought it would be. They gave me one hour to do it; I was done in about 40 minutes. By the time I left their office and got into my car, I realized that I had been there for almost 4 hours.

While I was driving home, I replayed every moment as if my mind had recorded a mental video of everything that had happened, every question, every answer and every reaction. At this point I knew that I was allowing myself to want this job too much, and as hard as I tried to keep things in perspective, it was too late. The very next day I sent a traditional hand written thank you card, thanking everyone that interviewed me by name and the day after that I got an email asking me for some business references. This stoked the fire even more and I gladly obliged. A few days later, I received a series of calls from each one of the references I submitted, one after the other each one telling me about all the wonderful things they had to say about me and how they thought I had this in the bag. My cautious optimism slowly started to transform into daydreaming. I began to put the cart before the horse. I started thinking about which clients I could keep and which ones I would have to let go. I thought about whom I could call to walk my dog in the event I had to work late; I started thinking about the best way to get to my new office without having to take on the dreaded 405 Freeway. I even started thinking of a good restaurant where I could take everyone who helped me prepare for the interview as a thank you. The position was scheduled to start in January, and all I could think of was “what a great way to start off the New Year”. Then as the days turned into weeks without hearing from the company, I began to get anxious. So I decided to send a follow up email, even though some of my friends told me not to, stating that it would make me seem desperate.

Truth be told I was desperate, I was desperate for a change, I was desperate to do something I loved, I was desperate for something to go my way. I sent an innocuous email, asking them how their Holidays were and reminded them that I was still interested in the position and whether or not they were able to contact my references, even though I knew they already had. And the reply I got 3 days later felt like a kick to the stomach to the likes of which I have never felt: “Hi Victor – Thanks for following up. We have filled the current position but would like to keep you in mind for the next opening as we continue to grow. You seemed to be a great fit and your references checked out fine. We simply had an opportunity to hire someone with more extensive media relations and PR experience. I’d like to stay in touch. If you haven’t heard from me or Tracy in six months, please feel free to follow up. Otherwise, I will let you know when we have another opening.” I was devastated when I first read it; in fact it’s still hard to read now. I felt like I had picked up my prom date in a fancy limo, gave her a lovely corsage showed her a great time and watched someone else take her home. It would take me a couple of days and a lot of encouragement from my dearest friends to get over the disappointment of coming so close to getting something I wanted so badly. “At least you got as far as you did and gained all that experience along the way” -one friend told me. “Hey, they didn’t have to tell you what they told you, there has to be a little truth in what they said about calling them back in 6 months”- another friend would say. As my deaf ears started to listen to reason again, I started to believe what my friends were telling me. Take what you’ve learned from this experience and apply to the next interview. At least I know what I want to do and what needs to be done in order to get there. It is possible to work on doing what you love while working to pay the bills and I am hopeful that one day the former will eventually turn into the latter. There is still plenty of time to make this year a great one. In the meantime, my writing has a home, albeit a humble abode, it is filled with character and characters alike with some of the best readers and followers anyone could ask for.
Posted by vicleyson@gmail.com at 8:54 AM

Labels: How to handle job rejection