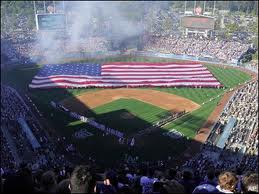 Over the past couple of weeks the main topic of discourse between family and friends alike has been the tragic, brutal and inexcusable beating of Bryan Stow a 42-year-old Paramedic and father of two who is currently in a medically induced coma and is hanging on for dear life. His only offense was wearing a Giants jersey to this year’s season opener at Dodger Stadium.

These types of incidents at Chavez Ravine that used to be considered isolated seem to be happening with more regularity. Catching a ballgame with friends, while cheering for your favorite team and eating a Dodger Dog is as American as Apple Pie, and for all intents and purposes was a great way to spend a day. Nowadays however, cheering for the Dodgers has taken a back seat to ridiculing and insulting anyone who isn’t. Before writing this post I typed in “Dodger Stadium Fights” on You Tube and was taken aback with what I saw and heard. The types of insults that were flying around were off the charts and were aimed at anyone, man, woman or child. It seems as though that some unruly Dodger fans are determined to pick up where the Raider Nation left off.

Being a proud Angelino for almost 30 years now, I have been to my fair share of Dodger games and have enjoyed every one. I have even attended Dodger games in San Francisco with friends in full Dodger regalia without incident. Does that mean that Giant fans are any better than Dodger fans? Not at all. I know it’s not fair to judge an entire city by the actions of the inane few. Unfortunately, in the world of 24-hour news that is updated by the minute negative headlines are what garners the most attention. I am all for supporting and cheering for your favorite teams with great zeal. One can bleed Dodger Blue without having to make opposing fans bleed in the literal sense. When leaving the ballpark one should say, “what a great game” not “well at least nobody got killed or beat up.”

During the many conversations I had about what occurred on opening day, one question kept coming to mind. “What would you have done if you saw this happening to someone?” I don’t expect anyone to put his or her own life at risk to help a total stranger, but the one thing that I hope no one does when confronted with this type of moral dilemma is nothing at all.
Posted by vicleyson@gmail.com at 9:02 PM