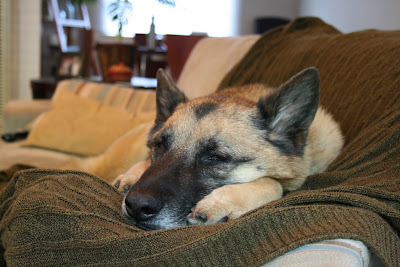 There are few industries that have been able to withstand the onslaught of all the economic doom and gloom over the last 3 years than the pet industry. It seems as though, pet owners would rather go without and make their own personal sacrifices to ensure that their beloved furry family members are continued to be spoiled rotten. I, for one happen to be a very willing participant of the demographic that treats their dog better than they do some humans they come across. When times got tight for me a little while back, I would easily opt for generic brands over gourmet items on my grocery list just to make sure that Harley (my German Shepherd pictured above) had plenty of her Science Diet Light and anything else that I thought her little heart desired.

Pet loving consumers have ensured that the pet industry’s sales of $45.4 Billion in 2010 have not been slashed by the dismal economy. According to the American Pet Product Association, there is hardly a scratch to be seen in spending on pets as all 5 categories have increased over 2009 numbers. While high-end specialty stores will see profits decline, there are gains in spending on quality foods, beds, and leashes. Value for money is what the public will be looking for in 2011.

Stores like PetSmart, still #1 in the market, with Petco following at #2 are still the staples when it comes to our pet’s overall needs. As much as children do not go without toys in a recession, neither do our or dogs.

In the same way that groceries have started to carry healthier, organic alternatives for humans to consume -pet stores both big and small have added more expensive organic and natural food brands to their product lines as well. In fact, not too long ago me and a friend of mine walked from my apartment to grab a bite to eat in Studio City and within a one mile radius on Ventura Boulevard we counted half a dozen high end pet stores, selling anything from gourmet dog biscuits & ice cream to deep tissue massages for the four legged.

The $45 Billion are US numbers only; I can hardly fathom a guess as to what the international numbers would be, considering that according to Dogs Decoded (a PBS/Nova documentary) anywhere in the world where there are humans there will most likely be dogs as well. Yet, most shelters will tell you, it costs around $1200 a year at the low end of the scale to keep a dog if you live in an urban area, and that’s only if nothing much goes wrong and you don’t use daycare and other perks. Here’s how we pet people spend all that money:

The question of why we love our dogs so much is an interesting one that scholars have been thinking about and studying for years (maybe even centuries). It’s largely a philosophical question that is interpreted or answered differently from one dog lover to the next.

If someone were to ask me that very question, my answer would be far from simple. I rescued my baby girl exactly 3 years ago come May 8th of this year. I have been led to believe that I am at least her 3rd owner and I am absolutely certain, beyond a shadow of a doubt that I will be her last. Anyone who has ever met me has probably met my dog as well. If she’s not physically with me, I seldom go more than 10 minutes without showing off pictures of her on my phone and talking about how much she means to me. In fact looking back at the last 3 years it's hard to tell who rescued who.

I found her during a time when things in my life were starting to unravel; she kept me sane when everything else drove me crazy. She has lived with me at 3 different places and 2 different cars, some of them fancy some not so fancy and she couldn’t care less either way. As I approach an age when friends and family alike are pressuring me to settle down and start a family- I often reply by saying that my life is simple right now and that is how I like it. I come home to something that is unbelievably excited to see me day in and day out and until my time of domestication comes, $1200 a year is a heck of a lot cheaper than diapers and private school.
Posted by vicleyson@gmail.com at 7:02 PM