The new look, of the newly rich: Living well below your means, even when you don’t have to? 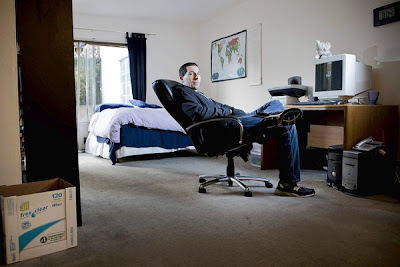 (Joe Greenstein, who recently sold his company Flixster for about $80 million, still lives in the San Francisco studio apartment he has rented for the last 10 years. (Dave Getzschman, For The Times / June 18, 2011)

With Wall Street all abuzz with the recent IPO’s of various technology and social media companies like Linkedin and Pandora, garnering initial public offerings and valuations of 30 to 50 times annual earnings. Stories of overnight multi, multi, multi millionaires are garnering as much, if not more attention than the companies themselves. What makes this particular technology surge different from the Gold Rush of the last tech boom is what this crop of CEO’s and Titans of Industry are NOT buying rather than what they are buying.

A lot of today’s nouveau riche are choosing to forgo the mansions, yachts and collection of exotic cars in exchange for social awareness, non-profit endeavors and philanthropy. Aaron Patzer who just turned 30, lives in a 600 square-foot apartment, who up until recently drove a 1996 Ford Contour until it finally broke down at 150,000 miles which he then replaced with a Subaru Outback. Patzer lives a modest lifestyle by any standard, but when you take into account that his net worth is estimated at over $150 million from selling his internet start-up company Mint.com to Intuit (the company responsible for such financial software such as Quicken and QuickBooks) you would think he was crazy. “Wealth needs a purpose greater than big houses and flashy cars.” Says Patzer, who prefers to spend his money on causes that he feels will make a difference in society and impact people’s lives rather than accumulating expensive toys.

Then there’s Joe Greenstein, who just last month sold his San Francisco based company Flixster to Time Warner Inc. for $80 million dollars. Greenstein still lives in the same $1000 a month apartment he has been renting for the last 10 years. The 33 year old says he feels fortunate to not be living paycheck to paycheck anymore and finds plenty of satisfaction in being able to pay for his younger brother’s college tuition.

Our fascination with stories of hitting it big and what we would do with new found wealth are about as common as society’s obsession with celebrity and realty television shows. Just think about anytime the Lottery Jackpot starts to reach the 8 and 9 figure mark and the water cooler talk that accompanies it. We often find ourselves daydreaming about what we would tell our bosses before abruptly quitting our job. We think about the houses and cars we would buy and all the exotic places we would visit. The biggest difference between some of these humbled entrepreneurs that we hear about vs. the, what I like to call “paycheck to paycheck ballers”. Those who make a lot of money but seldom have any savings put away and cannot wait until the 1st and 15th of every month, is passion.

Most of us can only hope to be lucky enough to one day find out how we would act or what we would do with such a windfall. I’d like to think that I would find solace in being able to take care of my family and having financial security. Those who know me best know that I live a pretty simple lifestyle, but they also know that, by no means do I live like a monk. I have an affinity for virtually anything sold at the Apple Store and I probably have one or two more watches than I need.

A lot of entrepreneurs who strike it rich enjoy the process of their endeavor and not just the end result. Often, their objective is to make a positive impact rather than just getting rich. The overall mindset seems to be different when your passion just so happens to make you wealthy rather than wealth being your ultimate passion.
Posted by vicleyson@gmail.com at 5:10 PM

Labels: How to handle sudden wealth