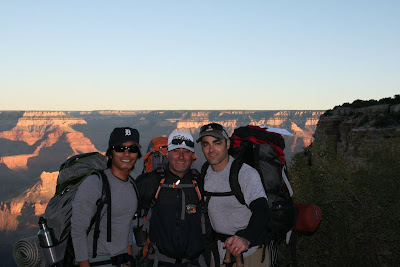 With the overall consumer sentiment still at an all time low, people across America are, for the first time in a long time, saving more money than they are spending. We hear it on the news almost daily, that small to medium sized companies, which employ over 75% of our nations workforce are sitting on cash and doling out more responsibilities to skeleton crews rather than hiring new employees.

The same fear lies with individuals as well. People are simply afraid to spend money, and who can blame them? With the combination of the constant economic doom gloom that we are bombarded with along with the stress of just trying to make ends meet, what options does one have for an enjoyable vacation without breaking the bank? Well, the answer can be found in 2 simple words…”road trip”!

Of course it also helps to have a good friend who is a travel writer for the LA Times, who happened to pitch a story of 3 average guys (Mark Segal a busy Sales Manager with 2 kids who recently turned 40, Jordan Rane also a father of 2 and Freelance Travel Writer at large who just turned 41 and Me, a Freelance Business Manager about to turn 35, and in desperate need of a get-away of any sort) driving out to Arizona from Los Angeles to camp out and hike at… where else, but The Grand Canyon! A destination that I have heard of, read about and seen in numerous movies but have never actually been to. Having been dealing with the stress of work, a German Shepherd in her 8th week of chemotherapy and not taking a vacation in almost 3 years I jumped at the opportunity.

I knew very little about the history of this iconic landmark, before setting off. All I had to go on was the advice of my more seasoned fellow campers, and began my preparation a couple days before departure time. Preparations, which were relatively simple and consisted of 3 key visits: 1) A trip to Adventure 16 to rent a sleeping bag and pad- total cost for 3 days $36. 2) A trip to Trader Joe’s for food and snacks, total cost $24. 3) A visit with another good friend and old college roommate to borrow his camping back pack, cost -FREE. The backcountry permits and other logistics were handled by Jordy, total cost of the campground for 2 nights $54.

Upon loading all of our gear in Mark’s truck and taking care of our first of three fuel fill ups (distributed evenly among us) we were off and would soon be on the historic Route 66 which stretches from Santa Monica, CA to Chicago, IL, just one of the many, many facts I would learn while sitting in a car with 2 great friends who happen to be much smarter than me for 8 hours.

I have always believed that the main purpose of any memorable road trip is to try to enjoy the journey as much as the destination itself, and that we did. A myriad of topics made the 8-hour drive seem effortless. Politics, movie trivia, recent events in our lives and endless banter kept us thoroughly entertained.

Once we crossed the Colorado River and entered the Arizona boarder, one of the most majestic sights on the planet, that has been in existence for a billion and half years was just minutes away. We exited the highway and were now on surface streets, which allowed us to roll down all of the windows and enjoy the absolutely perfect October weather that would stay with us for the duration of our trip.

As soon as we arrived at the Grand Canyon Village, all Mark and Jordy kept telling me was that “the canyon is just past that hotel over there”. I felt like I was a little kid, trying to control myself from jumping out of the, still moving car, until I finally told them to stop and let me out. As soon I got out and walked 50 or so yards past a group of tourist taking pictures I was completely dumbfounded with what I saw. Every cliché that I ever heard about this place could not have been more true. I even remembered a comment that the kid at Adventure 16 told me when I was renting my sleeping bag…”Dude that place is sick! You are going to be blown away when you see it for the first time.” a statement that I half believed and half rolled my eyes at, but he was right.

I had to literally take a moment to let my brain process what my eyes were seeing. Then I had to acclimate myself to the enormity of the canyon itself, and even though I was standing safely behind a railing, I had to steady my quivering knees and sweaty palms, symptoms that were caused by the 7000 foot drop I was looking down at. A process that I would have to repeat several times over during the hike down and hike back up.

working on for the next couple of days, we set up camp, got familiar with our surroundings and were in bed by 9:30 in an attempt to give ourselves enough rest to wake up at dawn to begin the 9 mile hike down the South Kaibab Trail, through some of the most beautiful terrain I have ever seen. Hiking down with 40lb back packs would take us about half a day, during which we would encounter a lot of new faces that would become familiar to us as we constantly leap frogged each other through our trek down to Phantom Ranch, which would be our next campsite at the bottom of the canyon.

You can only casually say "hi" to someone in passing once, a second and third time warrants some conversation to ensue. During our decent we would run into a group of 3 sisters well into their 50’s and 60’s who were hiking down and back up on the same day. They would share stories of how close all 13 siblings are to each other, and how much they loved the Green Bay Packers. Jordy randomly got paired up with a young twenty-something engineer from Colorado who talked about not owning a cell phone, a story that I was both impressed by and jealous of.

Once we got to the bottom our efforts were rewarded with a quick dip in the cool and crystal clear Colorado River. After setting up camp we headed off to the Canteen, which was a cafeteria type place that sold $3 Snickers Bars and had some of the best Lemonade I have ever tasted. It was a place where people congregated to cool off and pass the time by playing a variety of games, like Trivia Pursuit and Scrabble which we took full advantage of.

We headed back to camp, and prepared our dinners, which consisted mainly of peanut butter and jelly sandwiches, salami sandwiches, chips, string cheese and an endless variety of trail mix. We had more motivation to get to bed even earlier than the previous night since we were all pretty beat from the hike down and we all knew that the 11 mile hike up the Bright Angel Trail would be much harder. We planned to be up by 6, we were all up by 5am packed and on the trail by 5:30.

The hike up was definitely more difficult and strenuous. Even though the novelty and the beauty were both very much still there, the higher we climbed the more it took a back seat to the abuse that our bodies were beginning to take. Our feet would be the first to experience the pain, followed by our necks, shoulders and backs from the additional weight of our packs. We all had our own thoughts that would help push us to the top. Mine, were comprised of thinking about my sick dog getting better, and how badly I wanted to have a burger, fries and a soda as soon as I got to the top.

We all reached the top of the canyon at different times, but, most importantly, all 3 of us made it just fine. We made a beeline for the restaurant that was right at the top of the north rim and ran into a couple that we had become quite friendly with along the way. They invited us to join them. We all ordered the same thing, burgers and fries. And the couple would buy us a couple rounds of beers as we celebrated the end of our 11- mile hike.

Shortly after, we headed off to the local market to pick up anything that did not resemble dried fruit or PB&J’s for dinner, went to a coin operated shower facility to get cleaned up and cooked some hot dogs over an open fire back at our camp site. We drove back down to LA the next morning, talking about the very same things we talked about on the way up, with the addition of what we just experienced of course.

Once I got into my own car to drive back to my apartment, I thought that I would miss LA a lot more than I actually did. It seems as though the more places I go to, and the older I get, the less I want to come back to the hustle and bustle of LA life.

The price of gas for each of us was about $50 per full tank; the price for food was less than that. All in all I would say that we spent less than $200 each for this amazing trip, spending quality time with some lifelong friends and not having cell reception, internet access or email for 2 consecutive days…priceless.

A special thanks to Jordan Rane- some of the coolest things I've done has been because of you!
Posted by vicleyson@gmail.com at 7:28 AM